This Holiday Season I played "catch up" on my movie watching--when I wasn't pig'n out with Nate and his family who came from LA to pay a Birthday/Christmas visit. Yes, our little minor turned 21 on Dec 24th. Well, in between the eating and the partying, I decided to review some flicks for you guys and here's what I watched and what I thought.

Personally, I have never liked Beyoncé on film. She was green in Austin Powers, provided us with crap in "The Fighting Temptations," gave us fluff in "The Pink Panther." She had her shot at the those L'Oreal commercials where her country/hick voice came bursting through as she exclaimed, "Cause I'm worth it!" and she just tried too hard in Dream Girls; but she finally hit the mark in Cadillac Records.

Beyonce as Etta James was cinema at its finest. She had the emotion, the feel and captured the essence Etta James is known for. In one particular scene, we find Beyoncé, or Etta, in an empty restaurant as she confronts her "White" daddy. But as he walks out leaving her without the recognition she wants, Beyoncé gives one of the most flawless performances I've seen; encompassing anger, rejection and heartache all at once (sounds like my last sexual encounter). Dare I say, it competes with Halle Berry's performance in "Introducing Dorothy Dandridge" and it most definitely beats out Jennifer Hudson's in "Dream Girls".

Cadillac Records is about so much more, it's about rough beginnings and the love of music--and the actors in the movie are at times fun, convincing and remarkable, but one actor stands out and outshines the rest and that's Beyoncé. Whatever you did to channel your performance, keep it up girl--cause you are, in one word, FIERCE!


What did I think of Cadillac Records ?: I gave it three Nando's.

Anyone who knows me knows that I will fall in love with the nearest uncircumcised Indian that you place before me and it comes as no surprise that I fell for the lead actor in this story--Dev Patel who plays Jamal Malik. (Praise Krishna that the role didn't go to Kal Penn)

The lead actress Frieda Pinto plays Latika who wasn't so shabby either. The story starts out with Jamal as a contestant on India's, "Who Wants To Be A Millionaire?" And he's taken into police custody because someone who comes from the slums like Jamal shouldn't know the tough questions being asked. After some brutal torturing, he's allowed to explained how such answers are rooted so deeply in him which is where this beautiful story begins to unfold.

This is not a "Bollywood" flick with hunky Indian men dancing and prancing around in sleeveless shirts exposing their huge biceps and tight bulges, but Slumdog Millionaire is a tale of woven woes that will certainly touch you with its great writing and cast of misfits.

The young actors in Slumdog are all convincing and real. I say watch it and get ready to be educated on Indian lifestyle and be amazed.

What did I think of Slumdog Millionaire ?: I gave it five Nando's!

I begged Nate to come with me to watch this. I even sat through an entire performance of the "Messiah" at Carnegie Hall for him and he still refused to go see Four Christmases with me. And after watching it alone--I don't blame him.

The movie is about Brad (Vince Vaughn) and Kate (Reese Witherspoon) avoiding their families at Christmas but due to a horrible fog bank, their dreams of ditching their family becomes a nightmare as their caught at the airport on TV being interviewed about cancelled flights.

Forced to visit their families they each are confronted with childhood traumas that seem to better fit an SNL skit than a full length movie with a funny guy and an Oscar winner. Where did she go wrong? Reese--do we need to discuss a new manager? Maybe get a better agent?

The movie was below my comedic level and I wouldn't recommend this to anyone unless water boarding (a US torture method) is unavailable to our troops as they confront terrorists. It's pretty bad from the start and the only part that made me happy was when the credits began to roll.

I gave Four Christmases one Nando.

Create and Manifest Your Future with a Vision Board 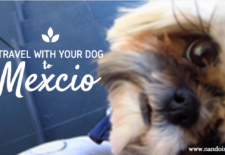 Traveling with your Dog to Mexico

Traveling with your dog to Mexico? Here's a detailed account of what we did/needed in order to have a successful trip with our Shih Tzu.
READ MORE

How to Get Happy Fast!